PET/CT for Pancreatic Malignancy lipase cancers are considered as some of the more aggressive types of cancer and are linked to poor survival rates. In addition to its propensity to spread rapidly, pancreatic cancer also does not manifest many obvious symptoms, leading to its detection at later stages. In India, the incidence of pancreatic cancer is 0.5 to 2.4 per 1 lakh men and 0.2 to 1.8 per 1 lakh women. 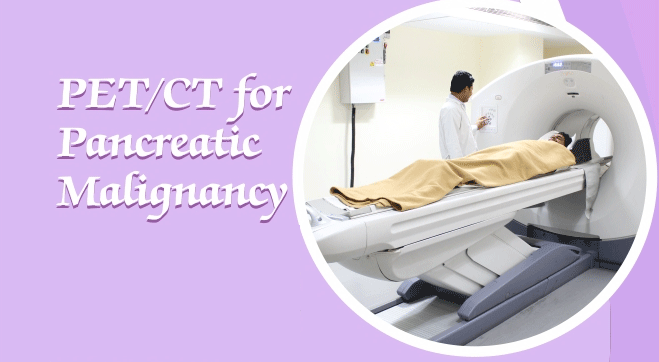 Why Pancreatic Cancer is known as Morbid Malady?
Despite its low rate of occurrence, pancreatic cancer is distinguished in having exceptionally high mortality rates, with the 5-year survival rate of some types being only 3 to 15%, depending on the stage at the time of diagnosis. The cause is largely unknown and it develops rapidly, showing symptoms of abdominal pain with weight loss and jaundice. Since these symptoms are vague, delay in diagnosis can lead to its detection in later stages, at which point it has lower prognosis due to the tumor having spread to the rest of the body. In addition to this, the presence of the organ in a remote location in the body, difficulty in establishment of diagnosis, lack of specific diagnostic markers and aggressive nature of the cancer makes it respond poorly to chemo- and radiotherapies. All of these factors contribute to the high mortality in pancreatic cancer. Among the risk factors of pancreatic cancer are family history, tobacco consumption, ethnicity, and obesity . In addition to these, there are suspected links of pancreatic cancer to ABO blood group (more common in people with blood group A and B) and infection with cancer-causing viruses such as Hepatitis C virus.

How to Diagnose Pancreatic Cancer?
Accurate diagnosis of pancretic cancer is essential, with focus on staging of the disease, assessment of resectability (how well the tumor can be surgically excised), and managing of symptoms. In many cases, asymptomatic pancreatic cancer is detected due to an abdominal scan carried out for other reasons. Imaging has thus increased the number of pancreatic cancers detected. Mostly, initial evaluation is done using Computed Tomography (CT) with intravenous administration of contrast dye. This allows visualization of the tumor in context of surrounding structures as well as distant organs and gives a fairly good assessment of the resectability of the tumor. In addition, Endoscopic Ultrasonography can be done in patients who do not show visible mass in CT scan. Tissue samples for tumor biopsy can be obtained using endoscopic means such as Endoscopy with fine-needle aspiration and Endoscopic Retrograde Cholangiopancreatography (ERCP). Certain serum biomarkers are currently under study for diagnosis, estimating prognosis, and monitoring therapy in pancreatic cancers, an example of which is Carbohydrate antigen (CA 19.9). Recently, PET-CT is emerging to play a promising role in pancreatic cancer.

F-Fluorodeoxyglucose Positron Emission Tomography Computed Tomography (F-FDG PET-CT) The F-FDG PET-CT scan is a type of nuclear medicine imaging technique that can measure metabolic functions in the body such as blood flow, oxygen usage and glucose metabolism. Cancer cells are distinguished from other cells in their ability to breakdown slucose much more rapidly, which can be detected by "F-FDG PET. "F. FDG is a tracer used in PET scans that gets taken up by the cancer cells wherein it accumulates and its location can be detected. CT scans provide an accurate image of the internal structures of the body, thus PET-CT combined, allows the precise localization of the abnormal region in the body.

PET-CT is reported to be highly sensitive and accurate for detection of pancreatic cancer, with sensitivity being as high as 85% to 97% and accuracy 85% to 95%. This modality is also able to evaluate tumor response to therapy after surgery, and can be used to monitor recurrence patterns during or after chemoradiotherapy. Lesions (tumors) that are less dense and which may not appear on conventional imaging techniques can be detected with PET-CT. Such lesions can be detected earlier by PET-CT as compared to CT or MRI alone, since at this point, the lesion is not visible as a physical abnormality. Most malignant pancreatic tumors are hypermetabolic as compared to normal pancreatic tissue, this causes them to take-up much higher quantities of F-FDG than normal cells, with the uptake being directly proportional to the size of the tumor (especially those larger than 1 cm).

Applications of F-FDG PET-CT in Pancreatic Cancer Management and Diagnosis Recent data highlight the importance of PET-CT in the including characterization of the tumor, staging of the cancer, and presurgical and preradiotherapy planning. It also has a greater ability of distinguishing between benign and malignant tumors.

Presurgical planning- For pancreatic cancers, it is essential to determine the resectability of the tumor to plan further treatment. PET-CT has shown far superior performance as compared to other modalities in initial staging of disease as well as detection of nodal and distant metastases. Pancreatic cancer most commonly metastasizes to the liver and peritoneum. PET-CT has been reported to show greater sensitivity than conventional scans in identifying distant metastases. This is especially useful for initial staging of pancreatic adenocarcinoma as it detects small and distant metastases, thus showing greater sensitivity in diagnosis of adenocarcinoma. Staging of pancreatic cancers using imaging techniques helps prevent unnecessary surgical procedures like Laparotomy.

Predicting Prognosis, Therapy Response, Recurrence of Pancreatic Cancer It has been shown that readings obtained from PETCT before treatment gave good indication of prognosis, overall survival and progression-free survival in patients with unresectable pancreatic cancer. Higher the baseline SUVmax (which indicates the amount of tracer taken-up by tissue of interest), the greater the likelihood of recurrence after surgery. SUVmax can also predict overall survival in patients with locally advanced pancreatic cancer However, results are varied between different studies and some suggest that correlation between metabolic response on FDG-PET and prognosis is still controversial."

Detection of recurrence through PET-CT is possible since actual changes in morphology are preceded by a reduction in F-FDG uptake. As a result, PET-CT Scan can detect the metabolic change before morphological changes appear in in vivo studies. Evidence suggests that PET-CT can distinguish between residual malignancy and fibrosis which commonly occurs after surgery, as well as characterize the metabolic behavior of hepatic lesions that are not accessible for biopsy.

Treatment response after chemotherapy can also be assessed by running PET-CT scan before and after the treatment. PET-CT has been useful in restaging of cases presenting with rising tumor marker levels, but which show negative CT evaluation, as well as for assessment of the tumor response to chemotherapy. Following surgery, F-FDG uptake is normally expected to resolve after 3 months, any remaining uptake after this time is usually indicative of residual tumor or recurrence.

How is PET-CT scan Cost Effective?
In addition to the above mentioned applications, PETCT has the advantage of being more cost-effective in the management of pancreatic cancer, which is one of the deciding factors in selection of the optimal imaging modality. This is because, although PET-CT may have high initial cost, it has potential to reduce the total number of scans required due to its superior detection of distant metastases, thus, helping in preventing surgery and reducing total imaging cost.

PET-CT is not without limitations- its sensitivity and specificity is still insufficient for detection of tumors 2-3 mm cm in size (at the point where they are resectable and curable). Further, F-FDG also accumulates in inflammatory tissue, hence there is a need for development of more sensitive and specific radiotracers for PET. At present, studies are underway for the development of novel radiotracers such as 3'-deoxy-3'-'F-Fluorothymidine.